Early in the 18th century cattle-farmers had already moved into the region with their cattle. Due to the mountainous nature of the region, suitable passes and roads were essential from the start. Most of the passes were made in game paths and thoroughfares used by the Khoekhoen and the San. The passes that originally gave access to the Warm and Cold Bokkeveld were the Elandskloof Pass, the Witzenberg and Skurweberg Passes as well as Mostershoek, Michell’s Pass, Swaarmoed Pass, Gydo Pass, Karoopoort, Theronsberg and Hottentotskloof, Katbakkies and Skittery-/Spesery-kloof, Droëlandskloof and Miskloof.

Elandskloof between Citrusdal and the Cold Bokkeveld is one of the oldest passes used by the cattle-farmers. It was replaced by the Middelberg Pass only in the 1940s. Famous travellers who travelled through Elandskloof were Carl Thunberg (1773) and John Barrow (1798).

The Witzenberg and Skurweberg Passes provided a thoroughfare between Tulbagh and the Cold Bokkeveld and the forerunners of these passes were already in use early in the 18th century. It was very dangerous; Thunberg referred to it in 1772. Field-cornet Pieter Pienaar built a better pass in 1780 because it was essential for residents of the Cold Bokkeveld to get to Tulbagh for official and church business. On the completion of Michell’s Pass in 1848 the use of the Witzenberg Pass decreased and it became obsolete.

The Mostertshoek Pass was built by a farmer, Jan Mostert, of the farm Wolwekloof in 1765. This road was used until Michell’s Pass was built in 1848. Ruts in the original pass are a sign of wagons struggling over it through the years.

Michell’s Pass was built and opened by Andrew Geddes Bain in 1848. The pass was named after Charles Michell, surveyor-general of the Cape Colony. The toll-house in the pass was erected in 1848 and the Greybrug, a stone structure of 12m in height, was built over the Breede River. This bridge was later on washed away and replaced by the Witbrug. Until the completion of the railway line to Kimberley in 1885, Michell’s Pass was the main route to the Diamond Fields in the north. The pass looks different today, because it has been widened and tarred. Some remains of the characteristic stone-packing by Bain in the original Michell’s Pass can still be seen along the road today.

The initial history of the road over Theronsberg and through Hottentotskloof is unclear. The remains of the pass used between the Warm Bokkeveld and the eastern plateau can still be seen between Eselfontein and Welvaart. Another pass that was used at the beginning of the 19th century and of which some remains are still visible, is the one between Lakenvlei and Draaihoek. A traveller, Lichtenstein, travelled through here in 1805 and reported that he left the Warm Bokkeveld at Leeufontein and immediately reached the plateau at Lakenvlei.

Before the middle of the 19th century there must have been a road here, because in 1812 reference was made to the condition of the roads in an official report, and Hottentotskloof was specifically mentioned.

Andrew Geddes Bain completed the Gydo Pass in 1848. Before its completion, in fact since the early 18th century, travellers travelled across the mountain by wagon-road. The pass was improved in the 1930s and tarred in the 1950s.

Trek farmers used Karoopoort from the early 18th century. The builder of the road is unknown, but Adam de Smit and Bain have been mentioned.

Passes that gave access to various areas in the form of trek roads were, for example, Katbakkies and Skitterykloof (Speserykloof). The famous writer, Boerneef, immortalised the sheep trek to the Ceres Karoo through here in his boek Boplaas. Droëlandskloof is north of Karoopoort and the passes through here link Wamakershoogte and Hoop-en-Uitkomst with Rooifontein in the Ceres Karoo. Miskloof, situated furthest south, was mainly a trek-road, but during the Anglo-Boer War a British guard post was established there and entrenchments from that period have been left almost undamaged in the kloof.

The Piet Esterhuysen road to the remote valley, Baliesgat, also deserves to be mentioned. This valley was explored and developed in the 19th century. In 1915 the original entrance to the Valley was very run-down and offered only a footpath contact with the outside world. All products from and to the valley had to be transported by pack animals. In 1945, Esterhuysen, a local farmer, began to build a road that was opened in 1951. 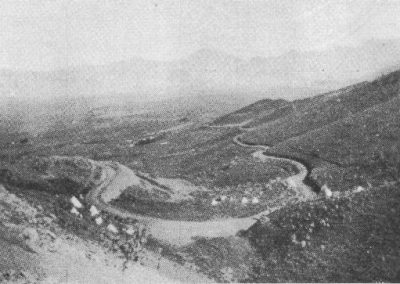 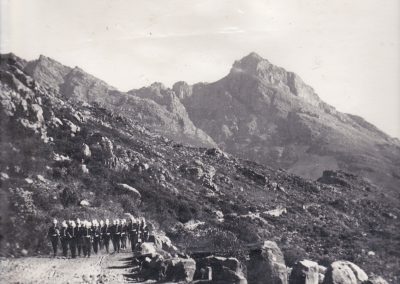 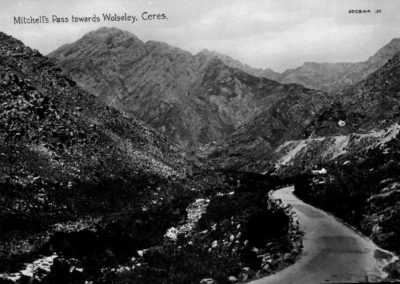 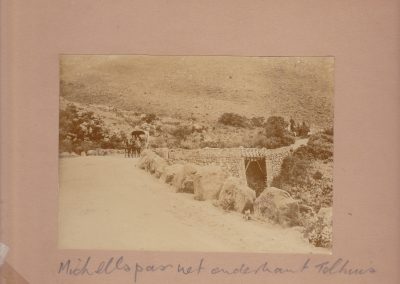 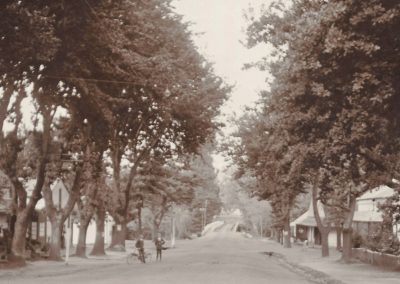 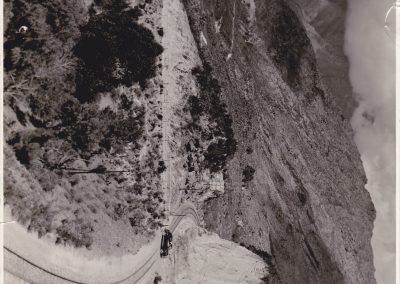 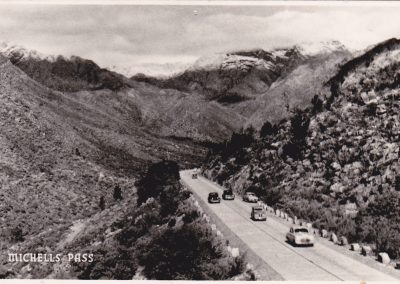 Its inaccessibility initially hampered the Bokkeveld’s progress. The first farmers carried their necessities by pack animal through the kloof along the river. From the waterfall it had to be carried over the mountain. Wagons later reached Ceres via a detour of some 150 km over the Hex River Pass. 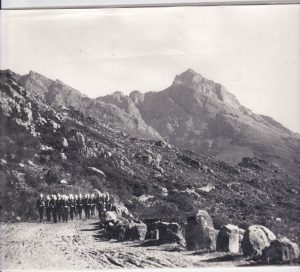 Bokkeveld farmers also wanted to benefit from the great upsurge in the Cape market in the 18th century, and in 1765 Jan Mostert of the farm Wolvenkloof built the first pass to Ceres. This pass was called Mostertshoek Pass and was certainly not built for joyrides. It criss-crossed the river and was so steep under the waterfall that the wagons had to be taken apart and carried over the mountain in pieces. Mostershoek Pass was used until 1848.

From 1846 to 1848 Andrew Geddes Bain built a new road – a masterpiece for those days – at a cost of 21 000 pounds. Small streams were forded with solid dry masonry and living rock was hollowed out of the mountain slope. The pass was named after Col. C Michell, surveyor- general of the colony for 20 years.

This great event laid the foundation for agricultural development in the Bokkeveld, and with the discovery of gold and diamonds, the pass became an important route to the gold and diamond fields. The transport industry started to bloom in Ceres.

Goods were brought from Ceres Station (now Wolseley) over the Michell’s Pass. A toll house was later built on the pass, and the following tolls were levied: 3 d per wheel of four-wheeled vehicles without remschoens; 2 d per wheel of other vehicles; 1 d per pack animal; ½ d each for sheep, goats or pigs, and 2 d each for all other animals.

Bain’s Michell’s Pass was used for nearly a century, until a concrete road was completed on 31 March 1946.

Michell’s Pass passes through the Ceres Nature Reserve and as its impact on nature had to be limited, the rebuilt pass mainly follows the old route. he roadway was widened from 6 m to 9.8 m and the hairpin bends were cut out. three passing lanes were constructed and the surfaced roadway is bordered with concrete paved side drains and guardrails conforming to modern standards. 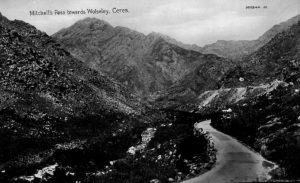 During construction the pass was closed for traffic for three hours per working day to accommodate blasting. All other construction work took place in full traffic with a minimum of work space available.

The foundation of the new Wittebrug consists of ten cylindrical caissons. Because there are enormous boulders in the river bed, this was the only viable option for the bridge foundation. These caissons were excavated by hand to a maximum depth of 13 m below the river bed. 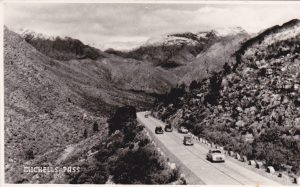 The old toll house and parts of Bain’s original stone retaining walls were preserved for posterity so that future generations can acknowledge Bain’s engineering genius.

They began to rebuild the pass in August 1988, and completed it four years later at a cost of R42 million.

The Old Tollhouse was built shortly after the completion of Michell’s Pass in 1848. From 1 January 1849 toll charges were collected here on animals and vehicles. The following tolls were levied: 3 d per wheel of four-wheeled vehicles without remschoens; 2 d per wheel of other vehicles; 1 d per pack animal; ½ d each for sheep, goats or pigs, and 2 d each for all other animals.  Since the Michell’s Pass opened an easy route to the north and because, when diamonds were subsequently discovered, it was on the main route from the Cape, the tollhouse played an exceptionally important role.  Goods were brought from Ceres Station (now Wolseley) over the Michell’s Pass.

The old toll house and parts of Bain’s original stone retaining walls were preserved for posterity so that future generations can acknowledge Bain’s engineering genius. 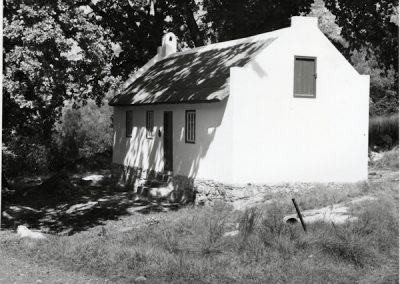 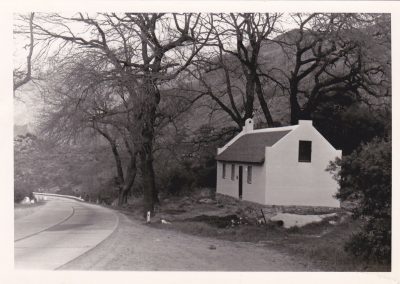 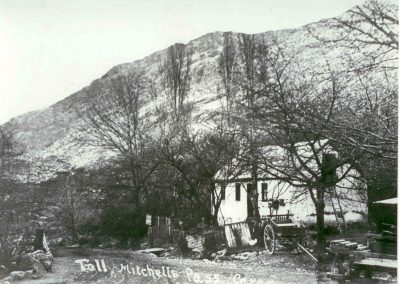